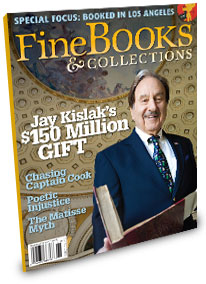 In the previous issue, Kimberly Howell identified four of what we believed were six printing variants in the first American edition of the latest Harry Potter. Bill Porter, of Atlanta, Georgia, and Sarah Whiteley, of Snoqualmie, Washington, were the first to write in with the missing printers. Here’s a complete list of the variant readings on the colophon page of the book.—Ed.

A: RR Donnelley in Crawfordsville, Indiana

B: RR Donnelley in Harrisonburg, Virginia

I am a loyal subscriber to your fine magazine and read every issue cover to cover. I have been a book collector for many years and have about 3,000 hardback books (young and old), as well as more than 1,000 vintage paperbacks of all species.

I also have every issue of Arizona Highways back to 1960. Most of your stories in the magazine are about people who own or have access to very expensive books, as noted in the title of your magazine. I guess I don’t have any “fine” books, but I do have “collections.”

I would like to read a few stories about run-of-the-mill collectors like myself. I’m sure there is no one out there who loves books any more than I do, rich or poor. I would also like to see more stories of unusual finds and stories about authors. I hope you do not hesitate to print this because you think it might offend your wealthy patrons!

Offering a nearly opposite view, Sarah Whiteley enclosed the following note when she informed us of one of the missing Harry Potter variants:

Just as an aside, I love that your magazine offers articles not only on antiquarian books, but on the book arts as a whole, including these modern classics. The article on the Harry Potter printings is just another example of how your publication successfully maintains its inclusiveness. Keep up the excellent work!

We greatly appreciate the inclusion of An Observant Eye: The Thoreau Collection at the Concord Museum in your gift guide. The book was a true labor of love by our curator David Wood and others among our small staff here at the Concord Museum. We are pleased with the recognition the book has received. It has been honored with publication design awards from the American Association of Museums and the New England Museum Association. We have also received a Leadership in History award from the American Association for State and Local History. And just last week we were notified that An Observant Eye has been named an Honor Book in Historic New England’s annual History Book Awards. Now, with the help of publications like yours, we look forward to getting the book into readers’ hands. The Thoreau collection here at the Concord Museum is a true American treasure.

In his article “Passing the Torch” (FB&C #29) Andrew Edwards cited the Amistad Research Center at Tulane University as one of the top institutions and collections of material related to African American history. However, I would like to clarify one fact. The wording in his article is slightly misleading, as there is no “Amistad Collection” at Tulane University. Rather, the Amistad Research Center is an independent, non-profit organization housed on the Tulane campus. The Center operates as a research library and archives, and although it works closely with Tulane’s library units, it is not formally part of the university’s library system. A minor clarification perhaps, but it is one that should be made to avoid any confusion on the part of researchers. Thank you again for the acknowledgment of the Center’s collections and continued best wishes to an outstanding and engaging magazine.

A final note on the article “Passing the Torch,” which focused on Charles Blockson’s retirement as curator of the Blockson Afro-American Collection, an extensive archive that Blockson assembled and then donated to Temple University. In September, after a nine-month search, Temple appointed Dr. Diane Turner, formerly a curator at the African-American Museum in Philadelphia, to oversee the collection.—Ed.

I am pleased to add a footnote to Kurt Zimmerman’s article, “Armchair Adventures: Ten Classic Accounts of American Book Collecting,” which appears in the November/December issue (#30) of your magazine. For those who do not insist on reading it in the first edition, The Adventures of a Treasure Hunter: A Rare Bookman in Search of American History by Charles P. Everitt is available in a trade paperback edition. I published the reprint in 1987, with an introduction by Jack Matthews. Everitt’s book was actually ghostwritten by Barrows Mussey, a book publisher and collector, who, in a letter to me, explained how the book was written: “My contract with [the publisher] Little, Brown included all the bourbon Charlie Everitt could drink, and in the course of writing I actually bought two or three cases of Old Grandad. It was a relatively moral arrangement, because I, being a rum drinker, did not take more than a glass an evening of the private stock, for sociability.” Everitt’s book was published after his death in 1950 and was a selection of the Book-of-the-Month Club at the time.

I enjoyed Kurt Zimmerman’s article and the expanded online content. I appreciated learning of some new titles and would like to add a couple of my favorites to the list: Percy Muir’s Minding My Own Business (1956) and the books of Herbert Faulkner West, starting with the wonderfully named Modern Book Collecting for the Impecunious Amateur (1936) and then moving on to its sequel, The Impecunious Amateur Looks Back (1966), and Notes From a Bookman (1968). As always your magazine continues to entertain and enlighten.