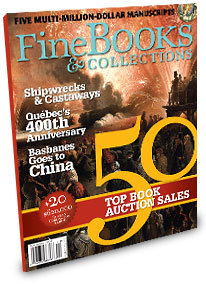 I am an enthusiastic and very happy subscriber to Fine Books & Collections, which is well produced, well edited, and has high production values. I look forward to reading it, and I always learn something of interest. Long may you be successful and prosperous!

That said, I noticed a disturbing pattern in the January/February 2008 issue (FB&C #31) that will not, I trust, become a trend. Please remember that your readers are bibliophiles and by definition tend to be interested in books more than in people or buildings. It was a bit disappointing to find in the “Gently Mad” section only a photograph of the genial and readable Mr. Basbanes but not one illustration of the book covers of Alice C. Morse being discussed. Being unfamiliar with her work, I longed to see one of these covers.

Hoping that this was an oversight, I moved on to the article about Michael Sharpe (“Sharpe’s Rise”). Again, pictures of Mr. Sharpe in his home and a picture of one of his employees, but no recognizable books! I wanted illustrations of Mr. Sharpe’s books and descriptions of some of the highlights of his collection. Becoming concerned, I turned to “Rabbit Hunters” (another picture of a person with out-of-focus books as a backdrop), and then to “Cooking the Books” and “First Person Singular,” where again people were the focus and the books were but wallpaper.

The article on Jay Kislak was especially disappointing for two reasons. First, there were five pictures of Mr. Kislak, including the cover spread, but only one photo of materials from his collection. I think we all want to see more of his treasures and to read about them. Second, I was leery of the reporter’s decision to ask for opinions about the value and importance of the collections only from those dealers, employees, and librarians who stood to gain from Mr. Kislak’s largesse. The opinions of a disinterested and objective scholar familiar with the collection would carry more weight with the reader.

Even the article on Whitman’s home, “Such a Place As This,” has three illustrations each of Whitman and his Camden house, but not one of his books. But don’t get me wrong: the articles were uniformly well written and interesting. There just weren’t enough pictures or descriptions of individual books to satisfy this bookman. Even where books were illustrated, as in Joel Silver’s always good “Beyond the Basics” column, the images were small and out of focus. Better were the articles “The Myth of Ulysses” and “Chasing Captain Cook” with their satisfying images of actual texts.

I was pleased to read the letter from Bill R. Dunlop of Arizona (FB&C #31), who expressed his passion for books and collecting and who suggested that he would love to see more articles dealing with “ordinary” collectors and their collections. I was disappointed by FB&C’s response, which seemed dismissive and defensive.

What is the most common whine we hear from book dealers these days? Listen closely and you’ll hear, “Where is the next generation of collectors going to come from?”

In the minds of some, a “fine” collection consists of bibliographical high points, or rare antiquarian tomes in superb bindings, or modern-fiction firsts in pristine dust jackets. There is a small cadre of high-end dealers who cater to the small number of wealthy collectors in these fields. It’s always fun to read about these dealers and collectors, but it’s a level that most of us can never aspire to.

As a book and ephemera dealer, I am much more drawn to the artifacts of cultural history, and I find plenty of customers who create collections from affordable and humble materials. Some of the most socially important collections in our institutional archives were created by people of limited means who followed their hearts rather than a popular collecting area. Louis Szathmáry created one of the finest cookbook collections in existence. He came to the United States as a young immigrant with a dollar in his pocket and purchased his first important book over time from his small weekly paycheck. Charles Blockson started his incredible collection of Afro-American history at a young age and well in advance of when this became a popular collecting area.

If we want a new generation of collectors, I think it’s important to foster the concept that interesting and even important collections can be created by resourceful and imaginative people. Certainly there are clues to topics and methods in every issue of FB&C—Mindell Dubansky’s persistence in tracking down the cover designs and history of Alice C. Morse is a fine example. Derek Hayes’s article “Go West, Idealists” suggests collecting books and ephemera on nineteenth-century American Utopian communities from a variety of perspectives.

FB&C could serve the larger book-loving community well by offering more articles on “ordinary” collections, or even a series of articles or a column on how to create, define, manage, research, catalog, and archive a collection. It’s time to induct the next generation of passionate collectors, and FB&C could be instrumental in building that new generation.

I will add that I am always thrilled when FB&C arrives in the mail. I love the mix of books and ephemera, fine press, and other coverage. I would love to see a little more emphasis, though, on the broader areas of collecting, and the fine points of defining and developing a modest collection.

The Prints & The Paper