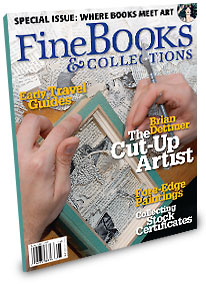 The piece “It’s My Galley” (FB&C #32) raises some issues. Review copies, advance reading copies, and galleys sent to a reviewer or book buyer do, indeed, become the physical property of the recipient, unless there is a specific agreement to return them made beforehand. One can, within limits, do what one wants with one’s property. But there is a standard of decorum that should apply: Don’t sell them until after the release of the book. This is courtesy, notlaw.

As to “following the flag” (“Beyond the Basics”), the issue of copyright and getting it or getting around it is a study in itself. I once did a survey of map copyright litigation, which is mounted on the website of the New York Map Society (tinyurl.com/yunhcs), and followed that with a more general talk at the Philobiblon Club, in Philadelphia, called “Copyright Litigation for Fun & Profit.” I made the observation that what was happening in many cases was called “piracy,” but was actually more like privateering because it was possible through loopholes in copyright laws and received quasi-approval from various governments.

It has been brought to my attention that I need to make a correction to our interview that was published in the January/February 2008 issue (“First Person Singular,” FB&C #31). My old employer, the LDS Church Archives, was contacted by the Northeast Document Conservation Center (NEDCC) concerned with a statement that was printed in the article regarding the treatment of the original manuscript of the Book of Mormon. The story described the manuscript as being “stored haphazardly in folders.”

My wording may have given an inaccurate impression of the NEDCC’s work. To set the record straight, I want to say that the NEDCC did an excellent job of delaminating the original Book of Mormon manuscript pages. The NEDCC housed the pages in L-sleeves with the understanding that Church conservators would later encapsulate the pages and store them in a protective box. My comment about the manuscript having been “stored haphazardly in folders” was intended to illustrate how they were being stored at the time that I came to work on the project. What I intended to convey was that there was no uniform encapsulation and labeling system being utilized at the time. I apologize for any confusion this may have caused.

I felt you should know what a fabulous find your magazine is. I found it browsing through a discount bookstore in Gatlinburg, Tennessee, and pored over it for the rest of my vacation, much to the chagrin of my husband. I’ve placed it on my bookshelf (I can’t bear to get rid of it) and can’t wait to get my first issue as a subscriber.

I’ve been remiss in not sending you this e-mail sooner. You and your staff are doing an outstanding job with Fine Books & Collections. I enjoy every issue, particularly the “How I Got Started” column on the back page and the many articles on vintage books and their histories. I love the mix and particularly the focus on older works rather than current authors. In the January/February issue (FB&C #31), the Walt Whitman house article was fascinating, as was the article on Jay Kislak’s marvelous donation and the James Joyce-Henri Matisse legend. Most book lovers are collectors of various sorts as well, so your addition of “collections” to the magazine is right on.

On the Origin of Species by Charles Darwin is widely regarded as one of the most influential books ever written. Because of the importance of the Origin, a census of the surviving copies of the first edition is being undertaken in association with the Darwin Online project at the University of Cambridge.

John Murray published On the Origin of Species in 1859 with a first printing of 1,250 copies. The book went on sale on November 24 and sold out immediately. The objective of this census is to locate and record as many copies of the first printing as possible and to provide a mechanism for keeping track of registered copies in the future.

The Darwin Census is being undertaken now in order to release a first version in 2009, which is the 200th anniversary of Darwin’s birth and the 150th anniversary of the publication of the Origin. The results (protecting the identities of private owners) will be published on Darwin Online for all to see and use.

If you have a first edition of the Origin, please contact the Darwin Census to receive a census registration form or go to darwin-online.org.uk to download a copy. The form will help owners identify which of three binding variants they possess, along with variations in the ads bound in at the back. If you are a dealer who has sold first editions of On the Origin of Species, the Darwin Census would appreciate it if you would inform your customers, as appropriate, of this project.