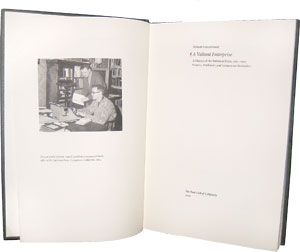 A History Of The Talisman Press, 19511993: Printers, Publishers, And Antiquarian Booksellers
By Robert Greenwood
San Francisco: The Book Club of California, 2007
383 pages
I loved this book. In almost twenty years of reviewing a wide range of books for many publications, I have never bluntly used those four simple words to describe any book.,p> The eighty-two-year-old Greenwoods tale represents a type of antiquarian bookselling and book publishing experience seldom captured in a memoir. Booksellers accounts more often chronicle the absolute highest end of the marketEdwin Wolf 2nd and John Flemings Rosenbach: A Biography, H. P. Krauss A Rare Book Saga, and David Randalls Dukedom Large Enough are three noted examples. Fewer memoirs concern the mid-range of the market captured by Greenwood. No one can rattle off a string of jaw-dropping, museum-quality showpieces the likes of which made Dr. Rosenbach a newsworthy celebrity in the early twentieth century (from the teens through the thirties), but Greenwood does detail many superb Western Americana rarities that he and his partner, Newton Baird, unearthed between the 1950s and 1990s.

From a middle class upbringing in Kansas, Greenwood learned old-fashioned printing, typesetting, and linotyping. A stint in the Navy and one library science degree later, he found himself a librarian in Denver, where he met Baird. Soon they were in San Jose, haunting the bookshops and turning up, over a period of six years, six copies of William Lewis Manlys Death Valley in 49 at a Goodwill for twenty-five cents each. Greenwood and Baird began publishing their own little magazine, Talisman, in 1952. Fatefully, Newt and I began thinking about launching our own book publishing business, building up a list of titles, combined with buying and selling scarce and rare books, so that one day both of us might work full-time at the press. And thats precisely what they did for the next few decades.

Ann Stanfords Magellan, a book-length poem, became Talisman Presss first title, in 1958, and in 1960 they published William Staffords first book of poetry, West of Your City. But reprints of historical Western Americana titles soon took over. These proved quite successful and became their niche, starting with C. M. Clarks 1861 A Trip to Pikes Peak in 1958.

Original research rolled off their press, too. In 1963, they published Dale Morgans Overland in 1846: Diaries and Letters of the California-Oregon Trail, which Greenwood described as the most important book of Western Americana we would publish. Then there was Hensley C. Woodbridges 1966 Jack London: A Bibliography which, Greenwood writes, did create new interest in Jack London, especially among rare-book dealers. Greenwood himself compiled the presss most ambitious project, the 1961 book California Imprints, 18331862: A Bibliography, today a standard reference. Greenwoods detailed account of undertaking this difficult project will fascinate all California collectors.

A Valiant Enterprise is actually a sequel to California Imprints, because Greenwood continued to collect information on unrecorded California imprints, thinking that some day [he] might publish a supplement. Somewhat belatedly, this supplement appears as an appendix in this book. Talk about value added!

The first in a string of rare-book catalogs from Greenwood and Baird appeared in 1960, selling almost 75 percent of its 128 items for $1,200. Great-find anecdotes too numerous to recount naturally pepper this chronicle. Typical (if thats possible) would be: On the table were what appeared at first glance to be old ledgers, all folio size in the dusty back room of a bookshop in Stockton. The first one I picked up was a manuscript account book for a general store...for the years 1861-1863...But what made it interesting was 90 percent of the entries were for Chinese customers. And further along among the ledgers was the best Wells Fargo manuscript item Id ever seen. Sigh. As dealers, Greenwood and Baird were often ahead of the curve. Greenwood writes, In 1960, there wasnt a great deal of interest in photographica, yet Talisman Press was picking up rare early work by pioneering Western photographers for what seems like a song and also selling them for prices that today seem like a song. The same holds for postcards. Baird collected mysteries when interest in the genre was slight. His collection of first editions in jackets, many signed, will make whodunit buffs green with envy and teary-eyed at the prices paid in the early 1970s.

A Valiant Enterprise is disappointingly light in illustrations. Readers would like to see Greenwood as a young Kansan, some of the eccentric characters that peopled his formative years, such as Alan Swallow, some of the interesting abodes that Talisman Press operated out of (after San Jose, the press moved to Los Gatos and then to Georgetown, in the Sierra Nevada foothills), and some of the choice Western Americana rarities that passed through their hands. I also wanted to see a whole shelfful of Talisman Presss publications. I also wouldve liked to see the role of Newton Baird fleshed out. Given his importance to Greenwoods personal and professional life, their deep commitment to each other, his close involvement with their publishing and bookselling operations, Baird remains a hazy figure.

Greenwoods tendency to cite a recent Internet price when comparing how much he asked for an item in the Talisman Press catalogs is problematic. The Internet is todays Wild West, with large price disparities in listings the norm and non-booksellers complicating the market. An Internet price coming from, say, an experienced specialist bookseller is more revealing and interesting than an Internet price from a consignment shop in Hoboken.

A Valiant Enterprise vividly recalls a not-too-distant time when a couple of enterprising booksellers could have it all, buying and selling exciting scarce and rare material in a field they loved and publishing similar exciting books under their own imprint. In another sense, Greenwoods time feels far distant, with todays Internet bookselling world making the feasibility of both of these endeavors more challenging than ever.

With a press run of only 350 copies and a price point high enough to give pause, A Valiant Enterprise can only reach a limited audience. As fine of a production as it is, lets hope an inexpensive trade edition lies in Greenwoods future.