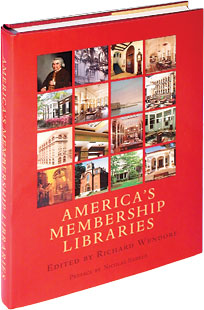 Nicolas Barkers preface sets the tone for this anthology of histories of the sixteen largest membership libraries in the United States. Pre-dating public libraries, these institutions were formed by groups of book-minded citizens. Barker sketches a picture of hardy colonists toting their ideals (books in their baggage) across the water to form new societies, and how they succeeded through an unceasing desire for self-improvement. Barker places the institutions covered into three groupsthose that were created before 1776, those of the athenaeum and mercantile library period (to 1850), and those of the Carnegie era (the late nineteenth century). Membership libraries, far more than public libraries, provided a social forum for lectures and  debate.

According to Wendorf, the dramatic development of an extended network of libraries within England, Scotland, and the American colonies from the 1730s onward waspredicated on a variety of interwoven forces that collectively redefined the British nation and its empire. The population of the British Isles tripled between 1750 and 1800, and these immense gains in population were accompanied by a rising level of literacy, especially in the burgeoning cities and among womenBy 1781 Samuel Johnson could refer to a nation of readers in England: Not in the sense that everyone could read, of course, but in recognition of the growing appetite for printed material that characterized the provinces as well as London.

The contributors to this book are either library directors or members of some standing, and although there is no set format for the essays, they all cover essentially the same elements: founding members and great benefactors, the architecture and design features of the physical buildings, an historical overview of the institutions and their collections (including high spots), and a bit about current missions and activities. Most sections conclude with a useful list of citations for further reading. Each institution has its own history and mission, but there is a commonality of purpose that is somehow intellectual, romantic, and often unapologetically anachronistic. It is certain that these libraries have survived (and some have thrived) by preserving and promoting a culture that is deeply valued by their members. The Library Company of Philadelphia, Americas first membership library, founded by Benjamin Franklin in 1731, is not covered in this volume because it has since morphed, lepidoptera-like, into an independent special-collections research centera natural progression for any library which has the means and inclination to grow along those lines. Money has always been an issue with these libraries, founded as they were on private funds. Several of the histories discuss the necessity of de-accessioning to survive. Given the recent flap surrounding the Providence Athenaeums sale of its copy of the double elephant folio edition of Audubons Birds of America (they were a subscribing member) at Christies for a little over $5 million in 2005, I found it interesting that at least two other membership libraries have done the same thing. In 1976, the New York Society Library sold their copy for $1.1 million, and in 1923, the Salem Athenaeum sold theirs through Goodspeeds for $2,000. It is admirable that the Providence Athenaeum held out for so long, especially since another copy fully accessible to the public resides a block away at the John Hay Library on the campus of Brown University. I note, however, that this book was written while the Providence Athenaeum still had its Audubon.

Like the institutions it describes, this is a beautiful and well-designed production, and contains substantial scholarship. It has an uncommonly even tone for an anthology. An interesting design feature of the book is the running heads: The subject librarys name appears on the verso of each chapter page, and the librarys website address appears on each rectoa rather elegant way to embrace the digital age without aesthetic compromise. It also has an excellent index, which makes it possible for someone to actually use the book (rather than merely read it). Although it looks nice on a coffee table, dont be fooledAmericas Membership Libraries is not a book that ones library should lack.

Richard Ring is head of special collections at the Providence Public Library.