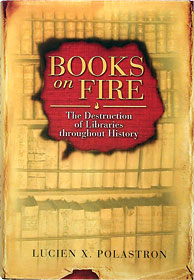 Lucien Polastron is a French scholar of China and the Arab world and the author of a major book on paper (as yet unavailable in English). He has produced a seemingly exhaustive chronicle of biblioclasm. In an appendix, he compresses the information into a six-page listing, by date, of major feats of book destruction.

Polastron does not approach the subject with Bakers heated rhetoric, Battless measured scholarship, or Basbaness discursive interviews. Instead, he adopts a sardonic attitude, as if to suggest that the only appropriate response to the human folly destroying books is dry, mordant humor. Polastron gives the same knowing smirk to autocratic rulers who seek to erase history by burning books as to library architects who fail to plan adequately for extreme weather. (The book was originally published in 2004, so it does not include the Katrina disaster.)

Im not sure what the readers reaction to Books on Fire is supposed to be. The chapter on the new biblioclasts covers book destruction during modern war and Nazism and in the former Soviet Union, China, Cambodia, Sri Lanka, Kashmir, Cuba, France, Bosnia, Afghanistan, and Iraq. There are ten other chapters. If I was supposed to feel outrage, I ended up exhausted.

Bakers Double Fold describes how and why libraries destroyed books and periodicals in favor of microfilm copies. What makes his book the superlative work on the subjectwhether you agree with him or notis that he specifically identifies what was lost in the process and why it matters. Polastron doesnt explain why we should care about the destruction of libraries. For those of us concerned about the impact of digitization on the culture of the book, such issues are not trivial. Most of the forks, clothes, chairs, and houses ever made have been destroyed, often deliberately and with little outcry and fewer disapproving books. Dont the simplistic arguments that are often given about booksthat they tell us about our history and cultureapply to those artifacts as well?

If books are different, and I think they are, we need to make a case for their importance. When (not if) printed books become an outdated technology, they will be discarded and recycled on a scale that will dwarf all previous book conflagrations combined. Theres already a whiff of smoke in the airAmazon.coms creepily named electronic book, the Kindle. Polastron lists the infernos of the past. It would have been nice if he offered insight into containing the wildfires burning today.