Book Reviews
Out of Print & Into Profit 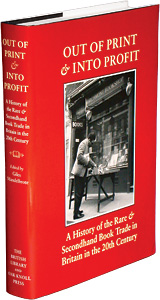 A History of the Rare and Secondhand Book Trade in Britain in the Twentieth Century
By Edited by Giles Mandelbrote
London and New Castle, Del.: The British Library and Oak Knoll Press, 2007
414 pages
Hard back: ISBN: 1584561904 Price: $55
Out of Print & Into Profit is a fitting monument to the ABA. Most rare-book aficionados will find something of interest in this collection.

In the introduction, Mandelbrote gives a nice overview of the socioeconomic forces that drove the English trade during its golden age in the nineteenth century. This serves as a prologue to the books focus, which is the trade in the twentieth century. The Internet has not yet completely transformed British bookselling in the way it has revolutionized the business of books in the United States, so it is perhaps appropriate that this anthology deliberately keeps its focus on the pre-Internet era. That editorial decision, while understandable, makes Out of Print an elegy for the past more than an analysis of the present or a prediction of the future.

As with all such collections, the quality of the essaystwenty-two in numbervaries widely. A few are no more than annotated lists in narrative form recording the names of memorable bookstores or catalogers. The best essays, however, offer a balance of personal experience, well-researched history, and that ineffable quality of anecdotal reminiscence that falls under the mystical rubric of lore.

Anyone who thinks booksellers simply buy and sell books with a bit of research thrown in for appearance should read the chapter Making Collections by Chris Kohler (of C. C. Kohler). Pioneered by British dealers, the practice of building a collection over time with the idea of selling it en bloc is so contrary to efficient business (in terms of labor and capital invested versus potential return) that it would be difficult to claim that profit is the only motive behind the custom. Kohler estimates that in the half century between 1955 and 2005, some 75 British booksellers have sold between 3,250 and 3,500 collections to various clients, mostly institutions.

Frank Herrmann, founder of Bloomsbury Book Auctions and a former director at Sothebys, offers a useful and fascinating overview of the role of the auctions in bookselling. Herrmann presents a dizzying genealogy of auction houses and their owners, covers the main aspects of their operations, and discusses the notorious rings, in which groups of dealers, many of them members of the ABA, conspired to keep auction prices low. For many years, the ABA refused to condemn the ring, and this book bravely and openly discusses this less-than-illustrious chapter in British bookselling history.

Anthony Hobson tightens the focus on auctions in his essay on the greatest bookselling coup of all timethe Robinson brothers 1939 purchase of the remnants of the Sir Thomas Phillipps collection. Despite the twenty-two auction sales of Phillippss books and manuscripts that were held between the collectors death in 1872 and the date of the Robinsons purchase, the remnants acquired by the brothers eventually realized upwards of £4 million when they were finally completely dispersed.

Michael Harris offers a view from the opposite end of the business. In his essay The London Street Trade, he describes enterprising low-end dealers who sold books by the wheelbarrowful. Harris admits that the opportunity to acquire books via the Internet is similar in terms of volume, but holds that no online purchase will ever replicate the magpie attractions or the dynamic and unpretentious character of trading books on Farrington and Portobello Roads.

Librarians will appreciate Michèle Kohlers The British Trade and Institutional Libraries and A. S. G. Edwardss The Antiquarian Book Trade and the World of Scholarship. Kohler identifies one of the challenges of dealing with institutions: Just when the bookseller is enjoying a rewarding relationship with a carefully cultivated librarian or curator, the librarian moves to another position or another institution. Edwards examines how dealers publications have made significant contributions to specific fields of scholarship, citing (among others) the writings of Christopher de Hamel. Few scholars, writes Edwards, have embodied so brilliantly the fruitful connection that can exist between the academic and the commercial worlds of books.

Out of Print and Into Profit is a fitting monument to the ABA. Most rare-book aficionados will find something of interest in this collection.