Book Reviews
The Age of the Storytellers 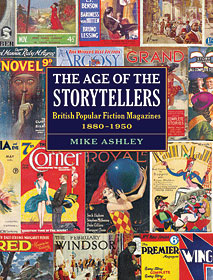 Ashley dates the age of the storytellers from 1880 to 1950, and he separates the magazines into two groups: glossy, general interest family periodicals, such as The Strand, which helped usher in the era of the short story; and the "pulp" magazines that typically contained only fiction. The Strand, probably best known for introducing Sir Arthur Conan Doyle's most famous character, Sherlock Holmes, is, in the author's opinion, the magazine that "defines the era" and thus merits one of the most substantial entries. Information in each entry includes publication dates, frequency, publisher, editors, format or size, prices, references, and institutional and private holdings. Especially noteworthy are the collecting points provided for each title.

The Age of the Storytellers is a worthwhile handbook that describes a publishing phenomenon that enjoyed immense popularity for a time and influenced the development of popular fiction, but ultimately became obsolete with the advent of cheap paperback books, cinema, and radio. These magazines were pretty much finished off by the one-two-three punch of the Depression, the Second World War, and the dawn of television.